You Are The Church (The Ekklesia Of God) 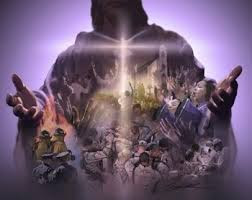 “Husbands, love your wives, just as Christ also loved the church and gave Himself for her, that He might sanctify and cleanse her with the washing of water by the word, that He might present her to Himself a glorious church, not having spot or wrinkle or any such thing, but that she should be holy and without blemish.”

Contrary to popular belief, the church is not a building that believer’s worship God in. The church is every individual believer that God put’s His Spirit in, and where ever this believer put’s his or her feet, there is the church.

Buildings can be demolished; buildings can be burned down with fire; the body can be killed, but the soul that’s inside of the body cannot be harmed by any physical act. When Jesus told Peter that He would build His church “on this rock and the gates of hell would not prevail against her”, He wasn’t talking about a physical building. He was talking about the chosen vessel that would carry His Spirit and His testimony to the ends of the earth, and nothing that Satan did would stop the preaching of the gospel of Jesus Christ. Even the physical death of the body could not do anything to the soul that was sanctified, purified, and set apart by God for His use.

“Jesus answered and said to him, “Blessed are you, Simon Bar-Jonah, for flesh and blood has not revealed this to you, but My Father who is in heaven. And I also say to you that you are Peter, and on this rock I will build My church, and the gates of Hades shall not prevail against it.”

“And Jesus answering said to him, `Happy art thou, Simon Bar-Jona, because flesh and blood did not reveal [it] to thee, but my Father who is in the heavens. `And I also say to thee, that thou art a rock, and upon this rock I will build my assembly, and gates of Hades shall not prevail against it;”

“One of the two who heard John speak, and followed Him, was Andrew, Simon Peter’s brother. He first found his own brother Simon, and said to him, “We have found the Messiah” (which is translated, the Christ). And he brought him to Jesus. Now when Jesus looked at him, He said, “You are Simon the son of Jonah.You shall be called Cephas” (which is translated, A Stone).

“Andrew, the brother of Simon Peter, was one of the two who heard from John, and followed him; this one doth first find his own brother Simon, and saith to him, `We have found the Messiah,' (which is, being interpreted, The Anointed,) and he brought him unto Jesus: and having looked upon him, Jesus saith, `Thou art Simon, the son of Jonas, thou shalt be called Cephas,' (which is interpreted, A rock.)”

1577. ekklesia ek-klay-see'-ah from a compound of 1537 and a derivative of 2564; a calling out, i.e. (concretely) a popular meeting, especially a religious congregation (Jewish synagogue, or Christian community of members on earth or saints in heaven or both):--assembly, church.

Jesus told Simon Peter that through Him, He would call out many people from the world to become members of His body and members of one another. He didn’t tell Peter to go out and build buildings so His people could meet in them, He told him and the rest of the apostles to go and preach the gospel to every creature under heaven.

God is not concerned about where we assemble; He is not concerned about how much we attend a Sunday service. He is concerned about our souls being conformed into the image of His Son. Inside of our bodies is an immortal soul that can be filled with the fruits of darkness from a life of sin and unbelief, or it can be washed by the blood of Jesus, the word, and filled with the fruits of righteousness by the indwelling of the Spirit of God. We don’t need to go inside of a building to receive what we need to cleanse the soul, and purify our hearts.

When the first body of believer’s were persecuted and scattered abroad in the first century it didn’t stop the gospel from being preached. In fact it helped to spread the word of God! The first ekklesia was not worried about any physical building or meeting place because they understood that THEY were the church. There were also many saints who gathered together every single day in each other’s houses to break bread, fellowship, and share the word of God with each other.

And with many other words he testified and exhorted them, saying, “Be saved from this perverse generation.” Then those who gladly received his word were baptized; and that day about three thousand souls were added to them. And they continued steadfastly in the apostles’ doctrine (teaching) and fellowship, in the breaking of bread, and in prayers. Then fear came upon every soul, and many wonders and signs were done through the apostles. Now all who believed were together, and had all things in common, and sold their possessions and goods, and divided them among all, as anyone had need. So continuing daily with one accord in the temple, and breaking bread from house to house, they ate their food with gladness and simplicity of heart, praising God and having favor with all the people. And the Lord added to the church daily those who were being saved.”

And when they had prayed, the place where they were assembled together was shaken; and they were all filled with the Holy Spirit, and they spoke the word of God with boldness. Now the multitude of those who believed were of one heart and one soul; neither did anyone say that any of the things he possessed was his own, but they had all things in common. And with great power the apostles gave witness to the resurrection of the Lord Jesus. And great grace was upon them all. Nor was there anyone among them who lacked; for all who were possessors of lands or houses sold them, and brought the proceeds of the things that were sold, and laid them at the apostles’ feet; and they distributed to each as anyone had need.”

This is the church of Jesus Christ! Every believer filled with the Holy Spirit; all things in common; meeting together every day; praying together, eating together, one heart and one mind, one teaching, and giving to every saint in need.

"Do not be unequally yoked together with unbelievers. For what fellowship has righteousness with lawlessness? And what communion has light with darkness? And what accord has Christ with Belial? Or what part has a believer with an unbeliever? And what agreement has the temple of God with idols? For you are the temple of the living God. As God has said: “I will dwell in them And walk among them. I will be their God, And they shall be My people.” Therefore “Come out from among them And be separate, says the Lord. Do not touch what is unclean, And I will receive you.” “I will be a Father to you, And you shall be My sons and daughters, Says the Lord Almighty.”

"Now, therefore, you are no longer strangers and foreigners, but fellow citizens with the saints and members of the household of God, having been built on the foundation of the apostles and prophets, Jesus Christ Himself being the chief cornerstone, in whom the whole building, being fitted together, grows into a holy temple in the Lord, in whom you also are being built together for a dwelling place of God in the Spirit."

"Coming to Him as to a living stone, rejected indeed by men, but chosen by God and precious, you also, as living stones, are being built up a spiritual house, a holy priesthood, to offer up spiritual sacrifices acceptable to God through Jesus Christ. Therefore it is also contained in the Scripture, “Behold, I lay in Zion A chief cornerstone, elect, precious, And he who believes on Him will by no means be put to shame.”

I pray to the God of heaven and earth that we will see the multitude of believers made one in heart and mind again in the body of Christ. I believe that we will see it again in our lifetime, because the scripture says that Jesus will present to Himself a spotless and unblemished church. He is the Head of the church and there is no one more concerned about His body than He is, and His word will be accomplished regardless of what has to take place in order for that to happen.

May God's Grace Be Shed Upon You,
Tyrone

Posted by Gospel Of The Kingdom Of God at 8:21 PM