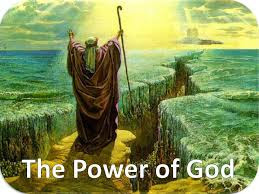 There are many people talking about God today, but where is the true, genuine power of an Almighty, Omnipotent God that we read about in the bible?

Let's be honest here, is there anyone today demonstrating the Spirit and the Power of God with undeniable, irrefutable signs, wonders, and mighty deeds that even satan can't imitate?

Listen to what Paul said in 1st Corinthians 2:1-5

How many of today's ministers have read the above scriptures? All I hear is talk, but where are the signs that should follow the word? Confirming that the person speaking is indeed sent by God.

Paul's ministry was not about his Godly wisdom or his eloquent speaking, it was all about Jesus Christ and demonstrating the Spirit and the power of God!

"Now some are puffed up, as though I were not coming to you. But I will come to you shortly, if the Lord wills, and I will know, not the word of those who are puffed up, but the power. For the kingdom of God is not in word but in power."

Do you understand what Paul said in the above bold and underlined scriptures? The kingdom of God is NOT in word, but IN POWER!

The Pharisees were amazed at the word of Jesus and saw the power of God demonstrated when the evil spirits came out of a man when Jesus commanded them.

"He went down to Capernaum, a city of Galilee, and was teaching them on the Sabbaths. And they were astonished at His teaching, for His word was with authority. Now in the synagogue there was a man who had a spirit of an unclean demon. And he cried out with a loud voice, saying, “Let us alone! What have we to do with You, Jesus of Nazareth? Did You come to destroy us? I know who You are—the Holy One of God!”

But Jesus rebuked him, saying, “Be quiet, and come out of him!” And when the demon had thrown him in their midst, it came out of him and did not hurt him. Then they were all amazed and spoke among themselves, saying, “What a word this is! For with authority and power He commands the unclean spirits, and they come out.” And the report about Him went out into every place in the surrounding region."

The apostles understood that they were only vessels, and instruments to be used by God for His glory and His purposes.

"Now as the lame man who was healed held on to Peter and John, all the people ran together to them in the porch which is called Solomon’s, greatly amazed. So when Peter saw it, he responded to the people: “Men of Israel, why do you marvel at this? Or why look so intently at us, as though by our own power or godliness we had made this man walk? The God of Abraham, Isaac, and Jacob, the God of our fathers, glorified His Servant Jesus, whom you delivered up and denied in the presence of Pilate, when he was determined to let Him go. But you denied the Holy One and the Just, and asked for a murderer to be granted to you, and killed the Prince of life, whom God raised from the dead, of which we are witnesses. And His name, through faith in His name, has made this man strong, whom you see and know. Yes, the faith which comes through Him has given him this perfect soundness in the presence of you all."

The time of talk is over! The time of the Son of Man is coming, the time of demonstrating the Spirit and the power of God is at hand!

Posted by Gospel Of The Kingdom Of God at 1:44 PM No comments:

Email ThisBlogThis!Share to TwitterShare to FacebookShare to Pinterest
Labels: Apostles And Prophets, Demonstration Of The Spirit And Power Of God, In Power, Spiritual Authority, The Power Of God, The Word With Power

The Stage Is Being Set!

Obama to tackle 'unfinished business' of gun violence in 2016

Obama plans to do something this year about gun violence in the U.S. in his last year in office. What will be the outcome of such an endeavor when there are so many in this nation that vigorously oppose anything being done about their second amendment rights, which states:


The Second Amendment of the United States Constitution reads: "A well regulated Militia, being necessary to the security of a free State, the right of the people to keep and bear Arms, shall not be infringed."

Quotes On The Issue:

"Former Congressman Joe Walsh tweeted on Thursday, “On Monday, Obama, on his own, to go after guns. It’s war. Defy his executive actions. Time for Civil disobedience.”

"While the National Rifle Association declined comment to CNN on the Obama administration’s latest unilateral action on gun control, the NRA previously said Obama’s “gun control agenda was rejected by Congress. Now, he is doing what he always does when he doesn’t get his way, defying the will of the people and using executive action.”

Arguing that the current gun laws in California are Obama’s “wish list of gun control” the laws did not “prevent the San Bernardino attack.”

NRA spokeswoman Jennifer Baker said, “The fact is, the President’s gun control agenda will only make it harder for law-abiding citizens to exercise their right to self-defense.”

Before my wife Cynthia woke up one morning about a week ago she heard: "Abraham Lincoln"

That same night I dreamed of a president being shot in the oval office.

Posted by Gospel Of The Kingdom Of God at 12:10 PM No comments: