Jesus Will Pierce Your Soul! 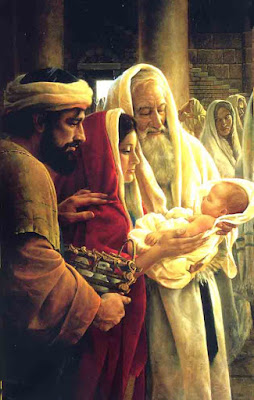 "Then Simeon blessed them, and said to Mary His mother, “Behold, this Child is destined for the fall and rising of many in Israel, and for a sign which will be spoken against (yes, a sword will pierce through your own soul also), that the thoughts of many hearts may be revealed.”

Many have a skewed viewpoint of who Jesus is, yes He is humble, meek, loving and kind, but He is also unwavering in His righteousness, uncompromising with the truth and accepting nothing less.

He may have seemed harsh and unloving in many situations, like when his parents went looking for Him and couldn't find Him.

"Now so it was that after three days they found Him in the temple, sitting in the midst of the teachers, both listening to them and asking them questions. And all who heard Him were astonished at His understanding and answers. So when they saw Him, they were amazed; and His mother said to Him, “Son, why have You done this to us? Look, Your father and I have sought You anxiously.” And He said to them, “Why did you seek Me? Did you not know that I must be about My Father’s business?” But they did not understand the statement which He spoke to them."

Wow! Here it is, two loving, concerned, and anxious parents, looking for their son three days and finally finding Him in the temple. Mary was likely speaking with a frown on her face, asking Him why had He done them wrong, they were upset and worried about their son.

Jesus said "Why were you looking for me?" What! How unkind, unthoughtful, uncaring even, He didn't even apologize for causing all the worry and anxiety of His parents. That's what it sounds like doesn't it? But perhaps Jesus was dealing with His newfound understanding of who He really was, the only begotten Son of God.

Or maybe He was just speaking out of His immaturity and not being thoughtful of His parents concern, and saying something He could have kept to Himself. You know that children and young kids can say some mean things, and be really truthful, even though it may hurt the hearer, they don't think about choosing their words carefully, and sometimes they just blurt out words.

The scripture tells us that His parents didn't understand the statement He made, I wonder how they would have felt if they did understand!

The scriptures also tell us that after this incident Jesus went home with His parents and was subject (obedient) to them, and likely never did anything else like that again. He went on to grow in maturity, stature, and favor with God and men.

How about the first miracle Jesus performed at the wedding, turning water to wine, do you think when He called His mother 'woman' He was being disrespectful?

"On the third day there was a wedding in Cana of Galilee, and the mother of Jesus was there. Now both Jesus and His disciples were invited to the wedding. And when they ran out of wine, the mother of Jesus said to Him, “They have no wine.” Jesus said to her, “Woman, what does your concern have to do with Me? My hour has not yet come.” His mother said to the servants, “Whatever He says to you, do it.”

We know that God is no respecter of persons and Jesus being God in the flesh did not have the same mother, son, connection that those in the world have, and many times the connection we have to our parents can be too close, where we view the parent as one of our friends, or a sister or brother. That kind of relationship can turn into something very dysfunctional and ungodly.

Jesus asked her "what does your concern have to do with me? My hour has not yet come", so He was saying to her I'm not concerned with them being out of wine, It's not my time to perform signs and wonders, BUT since the law said to honor your mother and father, Jesus respected and honored His mother by resolving her concern and turning the water to wine!

Mary obviously knew how Jesus was and told the servants "whatever He says to you, DO IT!" She knew He would take care of her concern, and I don't see many more times in the gospels where it mentions Mary speaking to her Son about her concerns.

The Pharisees and the disciples of Jesus had their own souls pierced when Jesus told them that if they didn't eat His flesh and drink His blood, they had no life in them.

"Then Jesus said to them, “Most assuredly, I say to you, unless you eat the flesh of the Son of Man and drink His blood, you have no life in you. Whoever eats My flesh and drinks My blood has eternal life, and I will raise him up at the last day. For My flesh is food indeed, and My blood is drink indeed. He who eats My flesh and drinks My blood abides in Me, and I in him. As the living Father sent Me, and I live because of the Father, so he who feeds on Me will live because of Me. This is the bread which came down from heaven—not as your fathers ate the manna, and are dead. He who eats this bread will live forever.”

Therefore many of His disciples, when they heard this, said, “This is a hard saying; who can understand it?” When Jesus knew in Himself that His disciples complained about this, He said to them, “Does this offend you? What then if you should see the Son of Man ascend where He was before? It is the Spirit who gives life; the flesh profits nothing. The words that I speak to you are spirit, and they are life. But there are some of you who do not believe.” For Jesus knew from the beginning who they were who did not believe, and who would betray Him. And He said, “Therefore I have said to you that no one can come to Me unless it has been granted to him by My Father.” From that time many of His disciples went back and walked with Him no more."

Even the disciples of Jesus who had seen miracles, heard and received words of life could not deal with this word, they couldn't understand it. The scriptures tell us that many of His disciples turned back and walked with Him no more. We all have a choice, to obey God's will or not, to follow the teachings of Christ and be broken by Him, or have the Rock fall on you and crush you.

When Jesus comes to pierce your soul with the truth, will you turn back and walk with Him no more, or will you stand and drink the cup the Father gives you? The choice is yours!

Posted by Gospel Of The Kingdom Of God at 10:28 PM No comments: