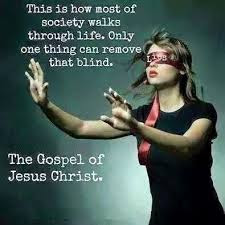 "But even if our gospel is veiled, it is veiled to those who are perishing, whose minds the god of this age has blinded, who do not believe, lest the light of the gospel of the glory of Christ, who is the image of God, should shine on them."

So many THINK they are intelligent, intellectual, and quick witted, they use logic and reason instead of faith to live out their daily lives. They may be wise according to man's standards, but not to God's!

And all the while they walk in a spiritual blindness and darkness that only Jesus can deliver them from.

What's worse though is those who THINK they know God but in reality they do not!

That's how the Pharisees and Sadducees were in the days of Jesus earthly ministry, and the same is true today with those who profess to be Christians but have never been truly converted to Christ.

Satan's first deception of mankind happened in the garden of Eden and what did Satan do to Eve? He deceived her into believing a lie that she would become like God when she ate the forbidden fruit, but she didn't understand that she was already like God!

The same is true today, Satan deceives people into believing that this life is all there is, so live your best life now, do what you want, live how you want, you only get one life they say.

"The Lord knows the thoughts of man, That they are futile."

"For the wisdom of this world is foolishness with God. For it is written, “He catches the wise in their own craftiness”; and again, “The Lord knows the thoughts of the wise, that they are futile.”

"There is a way that seems right to a man, But its end is the way of death."

Very few understand how the enemy of ALL our souls operates, but God opens the minds and the hearts of those who are true followers of Christ and those who seek after Him and His wisdom.

Do you understand that Satan has the power to deceive the whole world?

"So the great dragon was cast out, that serpent of old, called the Devil and Satan, who deceives the whole world; he was cast to the earth, and his angels were cast out with him."

That's why Paul told the Ephesian saints to put on the WHOLE armor of God!

"Finally, my brethren, be strong in the Lord and in the power of His might. Put on the whole armor of God, that you may be able to stand against the wiles of the devil."

Will you stand in the truth of God with the mind of Christ? Or will you fall under the great deception of the master deceiver?

Posted by Gospel Of The Kingdom Of God at 4:41 PM No comments: Links to this post

Email ThisBlogThis!Share to TwitterShare to FacebookShare to Pinterest
Labels: Renewing Your Mind, Satan's Great Deception, The Devil Deceives The Whole World, The Thoughts Of Man Are Futile

Renewing Your Mind (series): You Are What You Think! 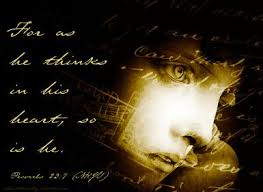 What do you think about all day? Do you meditate on the word of God? Or is your mind on the cares of this world?

Solomon, the wisest man who ever lived, and David the second king of Israel, understood how important the mind is, they knew the secret to overcoming this world, Satan, and the flesh that our souls inhabit.

For as he thinks in his heart, so is he.

I will meditate on Your precepts, And contemplate Your ways. I will delight myself in Your statutes; I will not forget Your word.

Oh, how I love Your law! It is my meditation all the day.

I have more understanding than all my teachers, For Your testimonies are my meditation.

No wonder David was a man after God's own heart!

If you spend your day thinking about your job, your spouse, kids, finances, your favorite T.V. show, hobbies, or who's leading in the standings of professional sports, then your mind needs to be renewed! Especially if you're a professing Christian!

Martha was worrying about her sister not helping her in the house, but she should have been doing what Mary was doing, listening and meditating on the words of Jesus!

"Now it happened as they went that He entered a certain village; and a certain woman named Martha welcomed Him into her house. And she had a sister called Mary, who also sat at Jesus’ feet and heard His word. But Martha was distracted with much serving, and she approached Him and said, “Lord, do You not care that my sister has left me to serve alone? Therefore tell her to help me.” And Jesus answered and said to her, “Martha, Martha, you are worried and troubled about many things. But one thing is needed, and Mary has chosen that good part, which will not be taken away from her.”

Even Peter's mind was still in need of renewal after years of being taught by Jesus Himself!

From that time Jesus began to show to His disciples that He must go to Jerusalem, and suffer many things from the elders and chief priests and scribes, and be killed, and be raised the third day. Then Peter took Him aside and began to rebuke Him, saying, “Far be it from You, Lord; this shall not happen to You!” But He turned and said to Peter, “Get behind Me, Satan! You are an offense to Me, for you are not mindful of the things of God, but the things of men.”

As you think in your heart and mind, so you will be!

Posted by Gospel Of The Kingdom Of God at 10:09 PM No comments: Links to this post

Email ThisBlogThis!Share to TwitterShare to FacebookShare to Pinterest
Labels: David King Of Israel, Meditate On God's Word, Renewing Your Mind, Solomon, You Are What You Think 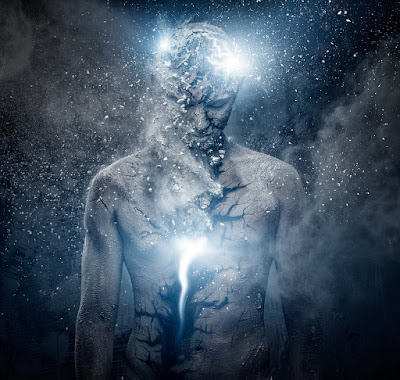 "And do not fear those who kill the body but cannot kill the soul."

Did Jesus give us a clear distinction between the body and the soul in the above scripture? Yes He did!

The first century Christians understood that life did not end after their bodies were killed, the scriptures tell us they were beheaded, sawn in two, fed to lions, and tortured to death, but they looked forward to a better resurrection!

"Others were tortured, not accepting deliverance, that they might obtain a better resurrection."

How could they face such persecution and death like they did? Their minds were renewed to the truth of who they really were in Christ!

If today's Christian would understand that they are immortal souls just inhabiting a physical fleshly body then they could begin to live life in a completely new way, they would have a different perspective on the world and every thing in it!

That's why Paul said we no longer regard anyone from a fleshly point of view!

The first century apostles understood the makeup of a human being and knew that after their bodies died their souls would live on!

"For this reason I will not be negligent to remind you always of these things, though you know and are established in the present truth. Yes, I think it is right, as long as I am in this tent, to stir you up by reminding you, knowing that shortly I must put off my tent, just as our Lord Jesus Christ showed
me."

The KJV translation uses the word 'tabernacle' instead of 'tent'. Both words come from the Greek word 'Skenoma' which means:

1. a tent, a tabernacle
a. of the temple as God's habitation
b. of the tabernacle of the covenant
*c. metaph. of the human body as the dwelling of the soul

"We are assured, then, and think it good rather to go away from home out of the body, and to come home to the Lord."

Did you know that we will be judged according to what we have done while IN the body?

"For we must all appear before the judgment seat of Christ, that each one may receive the things done in (through) the body, according to what he has done, whether good or bad."

"Jesus said to her, “I am the resurrection and the life. He who believes in Me, though he may die, he shall live. And whoever lives and believes in Me shall never die. Do you believe this?”

Posted by Gospel Of The Kingdom Of God at 1:26 PM No comments: Links to this post