Listen in to this timely word for the bride of Christ and be encouraged in your soul by the truth of Jesus Christ!

Join us next Sunday on Blogtalk Radio for an open mic time of ministry in the word. All biblical topics are open for discussion, if you have a question, testimony, prophecy, teaching, in need of prayer, deliverance from demons, or healing.

Call in and receive the soul liberating ministry of the Lord as He works through our earthen vessels to minister His love, grace, and mercy to all who call on His name!

Posted by Gospel Of The Kingdom Of God at 1:59 PM No comments:

'JESUS: He Lived Among Us' Free DVD

Register your 'church' or make a donation to Voice Of The Martyrs and receive a free DVD movie of JESUS: He Lived Among Us

Posted by Gospel Of The Kingdom Of God at 6:50 PM No comments:

Email ThisBlogThis!Share to TwitterShare to FacebookShare to Pinterest
Labels: Free DVD, Free Jesus Movie, Jesus He Lived Among Us, Voice Of The Martyrs

Whoever Desires To Become Great Among You, Let Him Be Your Servant

"But Jesus called them to Himself and said, “You know that the rulers of the Gentiles lord it over them, and those who are great exercise authority over them. Yet it shall not be so among you; but whoever desires to become great among you, let him be your servant. And whoever desires to be first among you, let him be your slave—just as the Son of Man did not come to be served, but to serve, and to give His life a ransom for many.”

The Spirit of God led me to these words of Jesus, although I had read them before as have most of us who love the truth, but when the Spirit gave me a deeper understanding of these scriptures I was blown away and quickly repented and asked the Father to forgive me for thinking more highly of myself than I ought and for placing my trust in men who call themselves 'leaders', when in truth Jesus said in Matthew 23:10 "Nor be called leaders, for One is your Leader, the Christ." (Greek Interlinear Bible)

The word used for 'leaders' in the Greek is:

"Then Jesus spoke to the multitudes and to His disciples, saying: “The scribes and the Pharisees sit in Moses’ seat. Therefore whatever they tell you to observe, that observe and do, but do not do according to their works; for they say, and do not do. For they bind heavy burdens, hard to bear, and lay them on men’s shoulders; but they themselves will not move them with one of their fingers. But all their works they do to be seen by men. They make their phylacteries broad and enlarge the borders of their   garments.They love the best places at feasts, the best seats in the synagogues, greetings in the marketplaces, and to be called by men, ‘Rabbi, Rabbi.’ But you, do not be called ‘Rabbi’; for One is your Teacher, the Christ, and you are all brethren. Do not call anyone on earth your father; for One is your Father, He who is in heaven. And do not be called teachers; for One is your Teacher, the Christ.  But he who is greatest among you shall be your servant. And whoever exalts himself will be humbled, and he who humbles himself will be exalted."

When Jesus was resurrected and appeared to His disciples on the sea shore of Tiberias, He spoke with Peter who had denied Him three times. Pay close attention to what Jesus said to Peter.

Notice that Jesus did not tell Peter to 'lead' His sheep, Jesus told Him to FEED HIS SHEEP! He made it clear to Peter and the rest of His disciples that they were called to feed and care for HIS sheep. Also notice that Jesus asked Peter the same question three times, the same number of times that he denied Jesus. When you look at Acts 10:15-16 the Lord showed the same vision to Peter three times and then after that he still wondered what the vision meant! At certain times in Peter's ministry it seems that he needed to hear things three times or more before he understood what the Lord was saying?  I know that makes me feel alot better because the Lord has had to show me things more than three times before I got it!

"And a voice spoke to him again the second time, “What God has cleansed you must not call common.” This was done three times. And the object was taken up into heaven again."

Along with Jesus, (who is the perfect example of true humility, obedience, and servant-hood) Paul gives us a great example of one who understood what it meant to be a servant of the Lord.

"For when one says, “I am of Paul,” and another, “I am of Apollos,” are you not carnal? Who then is Paul, and who is Apollos, but ministers through whom you believed, as the Lord gave to each one? I planted, Apollos watered, but God gave the increase. So then neither he who plants is anything, nor he who waters, but God who gives the increase."

"Now when we heard these things, both we and those from that place pleaded with him not to go up to Jerusalem. Then Paul answered, “What do you mean by weeping and breaking my heart? For I am ready not only to be bound, but also to die at Jerusalem for the name of the Lord Jesus.”

Let those who call Jesus their Lord and Savior remember that God opposes the proud but gives grace to the humble!

"Therefore if there is any consolation in Christ, if any comfort of love, if any fellowship of the Spirit, if any affection and mercy, fulfill my joy by being like-minded, having the same love, being of one accord, of one mind. Let nothing be done through selfish ambition or conceit, but in lowliness of mind let each esteem others better than himself. Let each of you look out not only for his own interests, but also for the interests of others. Let this mind be in you which was also in Christ Jesus, who, being in the form of God, did not consider it robbery to be equal with God, but made Himself of no reputation, taking the form of a bondservant, and coming in the likeness of men. And being found in appearance as a man, He humbled Himself and became obedient to the point of death, even the death of the cross. Therefore God also has highly exalted Him and given Him the name which is above every name, that at the name of Jesus every knee should bow, of those in heaven, and of those on earth, and of those under the earth, and that every tongue should confess that Jesus Christ is Lord, to the glory of God the Father."

Posted by Gospel Of The Kingdom Of God at 6:29 PM No comments:

Email ThisBlogThis!Share to TwitterShare to FacebookShare to Pinterest
Labels: Humility, Leaders, Let Him Be Your Servant, Love One Another Deeply From The Heart, Obedience, Servant, Servanthood, You Are All Brothers

A Word For The Bride 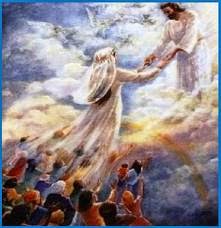 Posted by Gospel Of The Kingdom Of God at 5:23 PM No comments:

Email ThisBlogThis!Share to TwitterShare to FacebookShare to Pinterest
Labels: He Is The Lord, His People Shall Never Be Put To Shame, No Shame, The Lord Is Our God, There Is No Other God

Seu servo Tyrone D Palmer
Posted by Gospel Of The Kingdom Of God at 9:48 PM No comments: