Testimonies On The Baptism Of The Holy Spirit (Smith Wigglesworth) 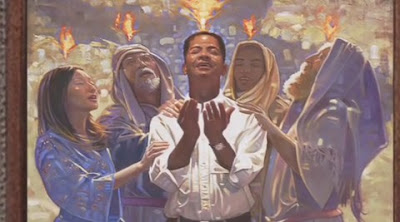 Smith Wigglesworth (8 June 1859 – 12 March 1947), Was a British evangelist and faith healer who was important in the early history of Pentecostalism.

"You know, beloved, it had to be something on the line of solid facts to move me. I was as certain as possible that I had received the Holy Ghost, and was absolutely rigid in this conviction. When this Pentecostal outpouring began in England I went to Sunderland and met with the people who had assembled for the purpose of receiving the Holy Ghost. I was continually in those meetings causing disturbances until the people wished I had never come. They said that I was disturbing the whole conditions. But I was hungry and thirsty for God, and had gone to Sunderland because I heard that God was pouring out His Spirit in a new way. I heard that God had now visited His people, had manifested His power and that people were speaking in tongues as on the day of Pentecost.

When I got to this place I said, “I cannot understand this meeting. I have left a meeting in Bradford all on fire for God. The fire fell last night and we were all laid out under the power of God. I have come here for tongues, and I don’t hear them-I don’t hear anything.”

“Oh!” they said, “when you get baptized with the Holy Ghost you will speak in tongues.” “Oh, is that it?” said I, “when the presence of God came upon me, my tongue was loosened, and really I felt as I went in the open air to preach that I had a new tongue.” “Ah no,” they said, “that is not it.” “What is it, then?” I asked. They said, “When you get baptized in the Holy Ghost-” “I am baptized,” I interjected, “and there is no one here who can persuade me that I am not baptized.” So I was up against them and they were up against me.

I remember a man getting up and saying, “You know, brothers and sisters, I was here three weeks and then the Lord baptized me with the Holy Ghost and I began to speak with other tongues.” I said, “Let us hear it. That’s what I’m here for.” But he would not talk in tongues. I was doing what others are doing today, confusing the 12th of I Corinthians with the 2nd of Acts. These two chapters deal with different things, one with the gifts of the Spirit, and the other with the Baptism of the Spirit with the accompanying sign. I did not understand this and so I said to the man, “Let’s hear you speak in tongues.” But he could not. He had not received the “gift” of tongues, but the Baptism.

As the days passed I became more and more hungry. I had opposed the meetings so much, but the Lord was gracious, and I shall ever remember that last day-the day I was to leave. God was with me so much that last night. They were to have a meeting and I went, but I could not rest. I went to the Vicarage, and there in the library I said to Mrs. Boddy, “I cannot rest any longer, I must have these tongues.” She replied, “Brother Wigglesworth, it is not the tongues you need but the Baptism. If you will allow God to baptize you, the other will be all right.” “My dear sister, I know I am baptized,” I said. “You know that I have to leave here at 4 o’clock. Please lay hands on me that I may receive the tongues.”

She rose up and laid her hands on me and the fire fell. I said, “The fire’s falling.” Then came a persistent knock at the door, and she had to go out. That was the best thing that could have happened, for I was ALONE WITH GOD. Then He gave me a revelation. Oh, it was wonderful! He showed me an empty cross and Jesus glorified. I do thank God that the cross is empty, that Christ is no more on the cross. It was there that He bore the curse, for it is written, “Cursed is everyone that hangeth on a tree.” He became sin for us that we might be made the righteousness of God in Him, and now, there He is in the glory. Then I saw that God had purified me. It seemed that God gave me a new vision, and I saw a perfect being within me with mouth open, saying, “Clean! Clean! Clean!” When I began to repeat it I found myself speaking in other tongues. The joy was so great that when I came to utter it my tongue failed, and I began to worship God in other tongues as the Spirit gave me utterance.

What had I received? I had received the Bible evidence. This Bible evidence is wonderful to me. I knew I had received the very evidence of the Spirit’s incoming that the Apostles received on the day of Pentecost. I knew that everything I had had up to that time was in the nature of an anointing bringing me in line with God in preparation, but now I knew I had the Biblical Baptism in the Spirit. It had the backing of the Scriptures. You are always right when you have the backing of the Scriptures and you are never right if you have not a foundation for your testimony in the Word of God.

For many years I have thrown out a challenge to any person who can prove to me that he has the Baptism without speaking in tongues as the Spirit gives utterance-to prove it by the Word that he has been baptized in the Holy Ghost without the Bible evidence, but so far no one has accepted the challenge. I only say this because so many were as I was; they have a rigid idea that they have received the Baptism without the Bible evidence. The Lord Jesus wants those who preach the Word to have the Word in evidence. Don’t be misled by anything else. Have a Bible proof for all you have, and then you will be in a place where no man can move you.

I was so full of joy that I wired home to say that I had received the Holy Ghost. As soon as I got home, my boy came running up to me and said, “Father, have you received the Holy Ghost?” I said, “Yes, my boy.” He said, “Let’s hear you speak in tongues.” But I could not. Why? I had received the Baptism in the Spirit with the speaking in tongues as the Bible evidence according to Acts 2:4, and had not received the gift of Tongues according to 1 Corinthians 12. I had received the Giver of all gifts. At some time later when I was helping some souls to seek and receive the Baptism of the Spirit, God gave me the gift of Tongues so that I could speak at any time. I could speak, but will not - no never! I must allow the Holy Ghost to use the gift. It should be so, so that we shall have divine utterances only by the Spirit. I would be very sorry to use a gift, but the Giver has all power to use the whole nine gifts."

Posted by Gospel Of The Kingdom Of God at 12:26 AM

Email ThisBlogThis!Share to TwitterShare to FacebookShare to Pinterest
Labels: Baptism With The Holy Spirit, Gift Of Tongues, Smith Wigglesworth, Speaking In Tongues, Testimonies