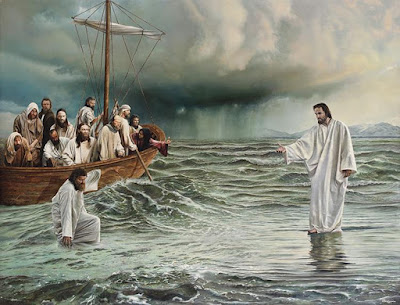 "Jesus said to them, “Most assuredly, I say to you, before Abraham was, I AM.” Then they took up stones to throw at Him; but Jesus hid Himself and went out of the temple, going through the midst of them, and so passed by."

The bible is full of supernatural events and acts of God from Genesis to Revelation. The scriptures testify of many supernatural works that the carnal mind cannot comprehend, and the supernatural manifestations and miracles of Jesus are no exception.

I want to point out just a few things that Jesus did that may have been over looked. Like the above scriptures when He was about to be stoned. How did Jesus hide Himself, then walk right through the midst of an angry crowd ready to stone Him to death, and then walk out of the temple?

The only conclusion I can draw is that He made Himself invisible! Now remember this is BEFORE His death, burial, and resurrection, when He received His resurrection power to just appear in a locked room and disappear at will.

Perhaps there are some magicians who can do that too, but their power definitely doesn't come from God!

One thing to note here is that Jesus wasn't afraid to speak the truth to those who opposed Him, He wasn't afraid of what would happen because He had all faith and trust in His Father. He knew that His time to die had not come, so He trusted the Father and the Holy Spirit to take care of Him in every situation.

"Then He said, “Assuredly, I say to you, no prophet is accepted in his own country. But I tell you truly, many widows were in Israel in the days of Elijah, when the heaven was shut up three years and six months, and there was a great famine throughout all the land; but to none of them was Elijah sent except to Zarephath, in the region of Sidon, to a woman who was a widow. And many lepers were in Israel in the time of Elisha the prophet, and none of them was cleansed except Naaman the Syrian.”

So all those in the synagogue, when they heard these things, were filled with wrath, and rose up and thrust Him out of the city; and they led Him to the brow of the hill on which their city was built, that they might throw Him down over the cliff. Then passing through the midst of them, He went His way."

Here we see Jesus speaking the truth to the religious leaders, and what happened? They tried to kill Him again, this time by throwing Him off a cliff!

But they didn't succeed because Jesus made Himself invisible again and passed right through the midst of them!

"Your father Abraham rejoiced that he would see my day. He saw it and was glad.” So the Jews said to him, “You are not yet fifty years old, and have you seen Abraham?” Jesus said to them, “Truly, truly, I say to you, before Abraham was, I am.” So they picked up stones to throw at him, but Jesus hid himself and went out of the temple."

A recurring theme right! Jesus speaks the truth and then the Pharisees and Jews want to kill Him! But once again Jesus hides Himself and walks right out of the temple! The amazing supernatural acts of Jesus recorded for all time.

And what's even more amazing is that Jesus said that those who believed in Him and obeyed Him would do even greater works than He did! Now how is that possible? Christ in us the hope of glory!

“Most assuredly, I say to you, he who believes in Me, the works that I do he will do also; and greater works than these he will do, because I go to My Father. And whatever you ask in My name, that I will do, that the Father may be glorified in the Son. If you ask anything in My name, I will do it."

If you believe it, you WILL receive it!

Posted by Gospel Of The Kingdom Of God at 9:38 PM No comments: Links to this post