"Beloved, I now write to you this second epistle (in both of which I stir up your pure minds by way of reminder), that you may be mindful of the words which were spoken before by the holy prophets, and of the commandment of us, the apostles of the Lord and Savior, knowing this first: that scoffers will come in the last days, walking according to their own lusts, and saying, “Where is the promise of His coming? For since the fathers fell asleep, all things continue as they were from the beginning of creation.” For this they willfully forget: that by the word of God the heavens were of old, and the earth standing out of water and in the water, by which the world that then existed perished, being flooded with water. But the heavens and the earth which are now preserved by the same word, are reserved for fire until the day of judgment and perdition of ungodly men. But, beloved, do not forget this one thing, that with the Lord one day is as a thousand years, and a thousand years as one day. The Lord is not slack concerning His promise, as some count slackness, but is longsuffering toward us, not willing that any should perish but that all should come to repentance."

"I charge you therefore before God and the Lord Jesus Christ, who will judge the living and the dead at His appearing and His kingdom: Preach the word! Be ready in season and out of season. Convince, rebuke, exhort, with all longsuffering and teaching. For the time will come when they will not endure sound doctrine, but according to their own desires, because they have itching ears, they will heap up for themselves teachers; and they will turn their ears away from the truth, and be turned aside to fables. But you be watchful in all things, endure afflictions, do the work of an evangelist, fulfill your ministry."

Posted by Gospel Of The Kingdom Of God at 1:53 PM No comments: Links to this post

A Voice Crying In The Wilderness (John The Baptist) 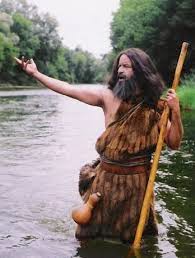 Now this is the testimony of John, when the Jews sent priests and Levites from Jerusalem to ask him, “Who are you?” He confessed, and did not deny, but confessed, “I am not the Christ.” And they asked him, “What then? Are you Elijah?” He said, “I am not.” “Are you the Prophet?” And he answered, “No.” Then they said to him, “Who are you, that we may give an answer to those who sent us? What do you say about yourself?” He said: “I am ‘The voice of one crying in the wilderness: “Make straight the way of the Lord,”’ as the prophet Isaiah said.” Now those who were sent were from the Pharisees. And they asked him, saying, “Why then do you baptize if you are not the Christ, nor Elijah, nor the Prophet?” John answered them, saying, “I baptize with water, but there stands One among you whom you do not know. It is He who, coming after me, is preferred before me, whose sandal strap I am not worthy to loose.”

John the baptist was one lone voice crying out in the midst of darkness and religious blindness. A great Light was coming and John was sent by God to prepare the way for the Lord. The same thing is happening today as it did then; the Pharisees and Jews read the law and prophets every Sabbath in their synagogues and memorized the scriptures and thought because of their intellectual understanding that they knew who God was. But here came John the baptist, a prophet of God who was killed just like all the other prophets who came before him! Do you see the ways of man? Even religious leaders of the day!

They were waiting on another Elijah and the Messiah, both of them came and the majority of people missed it!

And His disciples asked Him, saying, “Why then do the scribes say that Elijah must come first?” Jesus answered and said to them, “Indeed, Elijah is coming first and will restore all things. But I say to you that Elijah has come already, and they did not know him but did to him whatever they wished. Likewise the Son of Man is also about to suffer at their hands.” Then the disciples understood that He spoke to them of John the Baptist.

"But the angel said to him, “Do not be afraid, Zacharias, for your prayer is heard; and your wife Elizabeth will bear you a son, and you shall call his name John. And you will have joy and gladness, and many will rejoice at his birth. For he will be great in the sight of the Lord, and shall drink neither wine nor strong drink. He will also be filled with the Holy Spirit, even from his mother’s womb. And he will turn many of the children of Israel to the Lord their God. He will also go before Him in the spirit and power of Elijah, ‘to turn the hearts of the fathers to the children,’ and the disobedient to the wisdom of the just, to make ready a people prepared for the Lord.”

Jesus said that there wasn't a greater man born of women than John the baptist, but today the least of those who enter the kingdom of God is greater than he was!

The time is upon us once again for true apostles and prophets to be sent out before the face of the Lord to make ready the remnant people that God has chosen for salvation. The true ministers of God will go forth in this last hour in the spirit and power of the Son of Man, Jesus! And you will hear the same message that John and Jesus preached, REPENT! For the kingdom of God is at hand!

“And you, child, will be called the prophet of the Highest; For you will go before the face of the Lord to prepare His ways, To give knowledge of salvation to His people by the remission of their sins, Through the tender mercy of our God, With which the Dayspring from on high has visited us; To give light to those who sit in darkness and the shadow of death, to guide our feet into the way of peace. So the child grew and became strong in spirit, and was in the deserts till the day of his manifestation to Israel."

"Then he said to the multitudes that came out to be baptized by him, “Brood of vipers! Who warned you to flee from the wrath to come? Therefore bear fruits worthy of repentance, and do not begin to say to yourselves, ‘We have Abraham as our father.’ For I say to you that God is able to raise up children to Abraham from these stones. And even now the ax is laid to the root of the trees. Therefore every tree which does not bear good fruit is cut down and thrown into the fire.

Now as the people were in expectation, and all reasoned in their hearts about John, whether he was the Christ or not, John answered, saying to all, “I indeed baptize you with water; but One mightier than I is coming, whose sandal strap I am not worthy to loose. He will baptize you with the Holy Spirit and fire. His winnowing fan is in His hand, and He will thoroughly clean out His threshing floor, and gather the wheat into His barn; but the chaff He will burn with unquenchable fire. And with many other exhortations he preached to the people."

Do you know the ways of God? Many today are waiting for the David's, Elijah's, John the baptist's, the sons of God, and the bride of Christ, but when they come, will you be prepared for the word of God that will flow from their mouths? I tell you, they have already come, but the world does not know them!

Posted by Gospel Of The Kingdom Of God at 12:44 PM No comments: Links to this post

Email ThisBlogThis!Share to TwitterShare to FacebookShare to Pinterest
Labels: A Voice In The Wilderness, Apostles Of Jesus, Elijah, John The Baptist, Prophets Of God, Spirit And Power, The Kingdom Of God Is At Hand, The Son Of Man

Em Jesus,
Cynthia Palmer
Posted by Gospel Of The Kingdom Of God at 12:18 AM No comments: Links to this post

Em Jesus,
Cynthia
Posted by Gospel Of The Kingdom Of God at 11:29 PM No comments: Links to this post

It Will Cost You Everything - Steve Lawson

Posted by Gospel Of The Kingdom Of God at 2:15 PM No comments: Links to this post

Email ThisBlogThis!Share to TwitterShare to FacebookShare to Pinterest
Labels: Disciples Of Christ, follow Jesus, It Will Cost You Everything, Self Denial, True Christianity

Cynthia
Posted by Gospel Of The Kingdom Of God at 9:41 AM No comments: Links to this post