My Sheep HEAR My Voice! 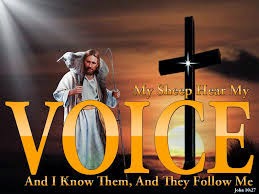 Before I was truly converted to Christ I used to think that I heard the voice of Jesus through the Scriptures, but after I was baptized with the Holy Spirit I literally HEARD the voice of Jesus speaking to me for the first time in my life. To say it was life changing is an understatement, it was earth shattering!

Jesus meant exactly what He said when He spoke the words, "My sheep hear my voice", and He wasn't talking about the scriptures when He said those words to His listeners over two thousand years ago. Understand that the first recorded gospel of the New Testament, (Mark) was not written until at least FIFTY years AFTER the death, burial, and resurrection of Jesus Christ! Before one word was written down it was SPOKEN and experienced first!

It should be absolutely common place and normal for the Lord's sheep to hear His voice speaking to them through His Spirit and in their minds as often as He wills, but instead when those who say they literally HEAR the audible voice of God speaking to them, they are looked at as loons, and insane!

But don't we read in scripture of the apostles and disciples of Jesus seeing and HEARING the risen Lord speak to them? Of course we do! So what's the difference between now and then?

I have heard many say that 'we have the bible now, so God doesn't speak audibly to His people anymore'. But doesn't Hebrews 13:8 say this: Jesus Christ is the same yesterday and today and forever.

The question is, have you heard the audible voice of Jesus? If not, what does that tell you?

Posted by Gospel Of The Kingdom Of God at 10:12 PM No comments: Links to this post