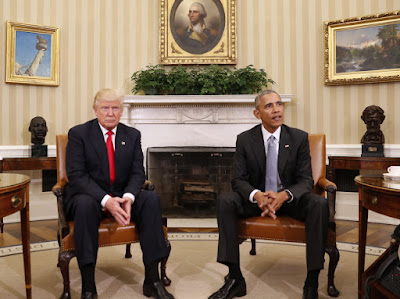 The American people have spoken! They have elected Donald Trump as the next President of the United States Of America. Doesn't seem right does it?

Will President-elect Trump be sworn in at twelve noon on January 20th, 2017?

It's possible he may not!

Here is a compilation of what the Lord has said and shown me and my wife over the years.

This morning after fasting and praying all day yesterday the Spirit woke me up sometime in the early morning, I usually get up to go to work at five am and this was before that. I lay there for a few seconds and then I said, "Here I am Lord, your servant and son is listening", then about thirty seconds later I heard, "Hydrogen Bomb" Then I asked the Lord, "is there anything else you want to tell the people Lord?", Then I heard "December 10th at 11:30"

I posted these words I received from the Lord on March 8th, and Sunday morning while my wife and I were praying for more details and understanding about this event. I specifically asked the Lord if this event would happen in New York City and right after I asked Him, the Lord said to my wife, "Red Cross", then she saw a vision of the Statue Of Liberty, and a building exploding from the bottom up.

Today Cynthia was praying for more confirmation from the Lord about this and again she was shown a vision of the Statue Of Liberty.

The Lord said to me this morning, "The Beast Will Be Unleashed"

I heard this word from the Lord during my prayer time on Tuesday, "A Short Time From Now"

The Lord spoke and said to me: "It Will Be As It Was In The First Century"

Before my wife Cynthia woke up one morning about a week ago she heard: "Abraham Lincoln"

That same night I (Tyrone) dreamed of a president being shot in the oval office.

Also last week I heard the name "Medgar Evers"  I didn't know much about him so I just checked Wikipedia, here is a short excerpt.

Evers was assassinated by Byron De La Beckwith, a member of the White Citizens' Council, a group formed in 1954 to resist integration of schools and civil rights activity. As a veteran, Evers was buried with full military honors at Arlington National Cemetery. His murder and the resulting trials inspired civil rights protests, as well as numerous works of art, music and film."

Another warning from the Lord about upcoming events? I believe so!

I'm sure I also heard the Lord say "Kennedy Assassination", and "Zapruder Film" at least three or four years ago.

The Lord said to me this morning: "Before He Even Takes Office"

Posted by Gospel Of The Kingdom Of God at 4:24 PM No comments: Links to this post