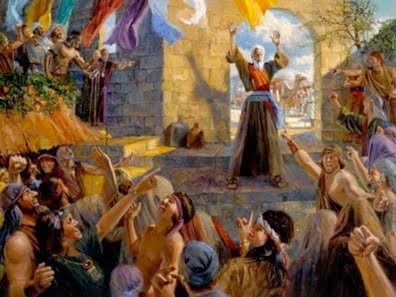 "Thus says the Lord: “As the new wine is found in the cluster, and they say, ‘Do not destroy it, for there is a blessing in it,’ so I will do for my servants' sake, and not destroy them all. I will bring forth offspring from Jacob, and from Judah possessors of my mountains; my chosen shall possess it, and my servants shall dwell there. Sharon shall become a pasture for flocks, and the Valley of Achor a place for herds to lie down, for my people who have sought me.

But you who forsake the Lord, who forget my holy mountain, who set a table for Fortune and fill cups of mixed wine for Destiny, I will destine you to the sword, and all of you shall bow down to the slaughter, because, when I called, you did not answer; when I spoke, you did not listen, but you did what was evil in my eyes and chose what I did not delight in.”

Posted by Gospel Of The Kingdom Of God at 6:33 PM No comments: Links to this post

Signs Of The Times Part 2 (It's Happening Right Now!)

The four horses are riding! Make no mistake about that. Many prophecies are being fulfilled and happening right now as I type these words. Notice Revelation 6:3-4

"When he opened the second seal, I heard the second living creature say, “Come!” And out came another horse, bright red. Its rider was permitted to take peace from the earth, so that people should slay one another, and he was given a great sword."

People are slaying one another around the world, every time we see another murder on the news we are seeing the fulfillment of the second seal, peace has most definitely been taken from the earth!

"When he opened the fourth seal, I heard the voice of the fourth living creature say, “Come!” And I looked, and behold, a pale horse! And its rider's name was Death, and Hades followed him. And they were given authority over a fourth of the earth, to kill with sword and with famine and with pestilence and by wild beasts of the earth."

What you must understand is the seals are judgments of God being unleashed in the spirit realm, and we can see the physical manifestations of these judgments through all the wars, people killing one another with guns, multitudes dying of hunger in Africa and other nations.

In the 14th century 25 million people were killed in Europe by the bubonic plague, also known as the 'black death'. In recent years we've seen the 'swine flu' that according to WHO, killed an estimated 284,500 people between 2009 and 2010, they called it a pandemic. And how many people have we heard about that were killed by wild animals attacking them? Or circus animals turning on their trainers and killing them?

All of these things are physical manifestations of the spiritual judgments of God!

The fuse has been lit and soon it will make it's way to the explosives! The stage is being set for the race riots to happen, what do you think will happen if the officer who shot and killed an unarmed African American teen goes free?

What do you think will be the end result of air strikes against ISIS or Syria? Retaliation! The judgments of God are happening RIGHT NOW!

I am reminded of the word the Lord spoke to my wife after Osama Bin Laden was killed,  "Revenge Will Soon Hit The Ground, What They Least Expect (America) Will Happen To Them"

What does America least expect happening to them? Bombs dropping right here on this land, which has never happened before, and no foreign army has ever invaded and occupied this country, but it's right at the door! Not to mention homegrown Jihadists and enemies of America already inside the country!

And is anybody paying attention to the Ebola virus? Pestilence, is it not? Indeed it is and it's spreading fast, what will be the outcome of this epidemic?

All Signs Of The Times! Wake up people! For The time is at hand!

Posted by Gospel Of The Kingdom Of God at 7:09 PM No comments: Links to this post

"Now the eleven disciples went to Galilee, to the mountain to which Jesus had directed them. And when they saw him they worshiped him, but some doubted. And Jesus came and said to them, “All authority in heaven and on earth has been given to me. Go therefore and make disciples of all nations, baptizing them in the name of the Father and of the Son and of the Holy Spirit, teaching them to observe all that I have commanded you. And behold, I am with you always, to the end of the age.”

The Lord added Yesenia Vazquez to our number this past Sunday, we are blessed, honored, and encouraged by the great love of our God who has entrusted us with this young soul. We pray that the Lord will give us strength, wisdom, and love to feed and care for His precious sheep.

To God be the glory!

Posted by Gospel Of The Kingdom Of God at 11:39 PM No comments: Links to this post