The Mark Of The Beast? 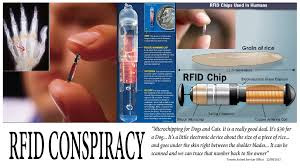 "He causes all, both small and great, rich and poor, free and slave, to receive a mark on their right hand or on their foreheads, and that no one may buy or sell except one who has the mark or the name of the beast, or the number of his name."

Then comes the RFID (radio-frequency identification) chip technology that has the potential to replace all forms of identification, credit cards, and cash.

"Radio-frequency identification (RFID) is the wireless use of electromagnetic fields to transfer data, for the purposes of automatically identifying and tracking tags attached to objects. The tags contain electronically stored information. Some tags are powered by electromagnetic induction from magnetic fields produced near the reader. Some types collect energy from the interrogating radio waves and act as a passive transponder. Other types have a local power source such as a battery and may operate at hundreds of meters from the reader. Unlike a barcode, the tag does not necessarily need to be within line of sight of the reader and may be embedded in the tracked object. RFID is one method for Automatic Identification and Data Capture." (Wikipedia)

So basically the day is coming when the false prophet, with the approval of the beast will FORCE all mankind to receive a mark on their right hand or on their forehead, and anyone not having this mark will not be able to buy anything (food, clothes, etc..) or sell anything.

Could the RFID chip be the mark of the beast? I think so, and I also think that if it's not in the exact form of the RFID chip, the technology for the mark is here and ready to be implemented when the time comes.

And it will not matter what a person believes or the opposition to this mark, if the mark is refused, the person refusing will be killed, it's as simple as that. And if that person dies in their sin without being converted to Christ, their immortal soul will enter Hell to await judgment day. The bottom line is, Jesus is our only hope!

The majority of the people who will not worship the beast or take his mark will be those in Christ, true Spirit-filled, born from above, children of God. It will be very similar to the first century when the Christians were martyred for their faith in Jesus and their belief in the word of God.

The first century Christians rejected the worship of Caesar in Rome and the religious traditions of the Pharisees and Sadducees in Jerusalem. And it will be no different today as the world grows darker and the laws are changed to appease the perversion of the ungodly.

"And I saw thrones, and they sat on them, and judgment was committed to them. Then I saw the souls of those who had been beheaded for their witness to Jesus and for the word of God, who had not worshiped the beast or his image, and had not received his mark on their foreheads or on their hands. And they lived and reigned with Christ for a thousand years."

Here is a video of what the mark could look like being used in a grocery store.


If you want life, repent and turn to Jesus, He is the only way that your soul can be saved!

Posted by Gospel Of The Kingdom Of God at 7:17 PM

Email ThisBlogThis!Share to TwitterShare to FacebookShare to Pinterest
Labels: False Prophet, Imbedded Chip, Last Days, Mark Of The Beast, No Buying Or Selling, RFID Chip, The Mark Is Forced