The Pre-Trib Rapture Is A FALSE Teaching! 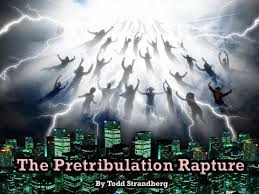 "Pre-tribulation rapture theology was popularized extensively in the 1830s by John Nelson Darby and the Plymouth Brethren and further popularized in the United States in the early 20th century by the wide circulation of the Scofield Reference Bible." (Wikipedia)

Jesus Himself refutes the pre-tribulation rapture doctrine with the parable of the wheat and the tares.

"Another parable He put forth to them, saying: “The kingdom of heaven is like a man who sowed good seed in his field; but while men slept, his enemy came and sowed tares among the wheat and went his way. But when the grain had sprouted and produced a crop, then the tares also appeared. So the servants of the owner came and said to him, ‘Sir, did you not sow good seed in your field? How then does it have tares?’ He said to them, ‘An enemy has done this.’ The servants said to him, ‘Do you want us then to go and gather them up?’ But he said, ‘No, lest while you gather up the tares you also uproot the wheat with them. Let both grow together until the harvest, and at the time of harvest I will say to the reapers, “First gather together the tares and bind them in bundles to burn them, but gather the wheat into my barn.”’”

Jesus said clearly, 'Let Both Grow Together Until The Harvest', so this tells us plainly that the righteous and the wicked will be on this earth together until the end of this age!

The Parable of the Tares Explained

Then Jesus sent the multitude away and went into the house. And His disciples came to Him, saying, “Explain to us the parable of the tares of the field.” He answered and said to them: “He who sows the good seed is the Son of Man. The field is the world, the good seeds are the sons of the kingdom, but the tares are the sons of the wicked one. The enemy who sowed them is the devil, the harvest is the end of the age, and the reapers are the angels. Therefore as the tares are gathered and burned in the fire, so it will be at the end of this age. The Son of Man will send out His angels, and they will gather out of His kingdom all things that offend, and those who practice lawlessness, and will cast them into the furnace of fire. There will be wailing and gnashing of teeth. Then the righteous will shine forth as the sun in the kingdom of their Father. He who has ears to hear, let him hear!"

Do You Have Ears To Hear?

Posted by Gospel Of The Kingdom Of God at 8:30 PM