Why Are You Afraid? 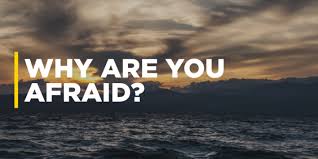 "For God has not given us a spirit of fear, but of power and of love and of a sound mind."

Is there anything that makes you afraid? How about the death of your body? Or physical persecution for being a Christian, maybe you fear a confrontation from an unbeliever, or speaking the truth when you know there will be disagreement.

If you have any fears, be encouraged! The Lord has promised to deliver us from ALL our fears!

"There is no fear in love; but perfect love casts out fear, because fear involves torment. But he who fears has not been made perfect in love."

Fear is from the devil, period! What happened when Adam and Eve first sinned? They hid from God when He was walking in the garden of Eden calling for them. And why did they hide from God? Because they were AFRAID!

"And they heard the sound of the Lord God walking in the garden in the cool of the day, and Adam and his wife hid themselves from the presence of the Lord God among the trees of the garden. Then the Lord God called to Adam and said to him, “Where are you?” So he said, “I heard Your voice in the garden, and I was afraid because I was naked; and I hid myself.”

When Adam and Eve sinned, darkness entered into their souls and instead of running to God when He called, they ran away from God!

That same thing can happen to us if we commit a sin and turn away from God instead of going to Him for help, healing, and forgiveness. Don't allow sin to deceive and entangle you, pushing you further and further away from God. Run to Him!

David was a man who knew God, even though he committed a grievous sin he still ran to God for forgiveness and deliverance. He knew that God would deliver him from evil, his enemies and ALL his fears!

"I sought the Lord, and He heard me, And delivered me from all my fears. They looked to Him and were radiant, And their faces were not ashamed. This poor man cried out, and the Lord heard him, And saved him out of all his troubles. The angel of the Lord encamps all around those who fear Him, And delivers them."

Posted by Gospel Of The Kingdom Of God at 8:34 PM

Email ThisBlogThis!Share to TwitterShare to FacebookShare to Pinterest
Labels: Do Not Fear, Fear, Fear Not, Perfect Love Casts Out Fear, Spirit Of Power, Why Are You Afraid