The Pre-Trib Rapture (Don't Believe It!) 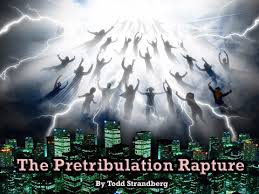 The word ‘Rapture’ is not found anywhere in scripture, but the Coming of Christ is. This doctrine has led many professing Christians to believe that they will be taken off the earth before the great tribulation and unveiling of the anti-christ man (beast). But what does the word of God have to say about the coming of our Lord Jesus Christ? Let’s take a look at the scriptures this doctrine is based on.

“But I do not want you to be ignorant, brethren, concerning those who have fallen asleep, lest you sorrow as others who have no hope. For if we believe that Jesus died and rose again, even so God will bring with Him those who sleep in Jesus. For this we say to you by the word of the Lord, that we who are alive and remain until the coming of the Lord will by no means precede those who are asleep. For the Lord Himself will descend from heaven with a shout, with the voice of an archangel, and with the trumpet of God. And the dead in Christ will rise first. Then we who are alive and remain shall be caught up together with them in the clouds to meet the Lord in the air. And thus we shall always be with the Lord. Therefore comfort one another with these words.”

Paul is talking to the Thessalonian saints about the coming of Jesus Christ to the earth for the second time to receive His people to Himself. Nowhere in these scriptures do we read about a pre-trib rapture of the dead in Christ or of the saints who are alive when He comes. In truth what we read is Jesus descending from heaven to earth with a SHOUT, with the voice of an archangel and the trumpet of God. Nothing about the Lord and the saints ascending back up into heaven to await the end of the great tribulation. If that was the truth wouldn't the Holy Spirit have led Paul to write that?

“But now Christ is risen from the dead, and has become the firstfruits of those who have fallen asleep. For since by man came death, by Man also came the resurrection of the dead. For as in Adam all die, even so in Christ all shall be made alive. But each one in his own order: Christ the firstfruits, afterward those who are Christ’s at His coming.

Again we don’t read anything about a pre-trib rapture, but of those who have fallen asleep (dead in Christ), and those who are Christ’s at His coming.

“Behold, I tell you a mystery: We shall not all sleep (dead in Christ), but we shall all be changed—in a moment, in the twinkling of an eye, at the last trumpet. For the trumpet will sound, and the dead will be raised incorruptible, and we (those alive when He comes) shall be changed.”

Once again no pre-trib rapture of the dead in Christ or of the living saints. What we read is the last trumpet sounding during the Second Coming of Christ and the dead being raised with the living saints being changed.

Some believe that only those in Christ will hear the trumpet and see Jesus, but that belief is unfounded by the scriptures. In truth here is what Jesus Himself said about His coming.

“Immediately after the tribulation of those days the sun will be darkened, and the moon will not give its light; the stars will fall from heaven, and the powers of the heavens will be shaken. Then the sign of the Son of Man will appear in heaven, and then all the tribes of the earth will mourn, and they will see the Son of Man coming on the clouds of heaven with power and great glory. And He will send His angels with a great sound of a trumpet, and they will gather together His elect from the four winds, from one end of heaven to the other.”

The words of Christ in Matthew make it clear to us that those in Christ WILL be on this earth during the great tribulation. In truth Jesus said in Matthew 24:9  “Then they will deliver you up to tribulation and kill you, and you will be hated by all nations for My name’s sake.” Jesus is coming AFTER the tribulation and when He comes every person will SEE Him coming on the clouds of heaven and then He will send His angels to gather the elect with the same sound of a trumpet that Paul told the saints would herald the Second Coming of Jesus.

“And there will be signs in the sun, in the moon, and in the stars; and on the earth distress of nations, with perplexity, the sea and the waves roaring; men’s hearts failing them from fear and the expectation of those things which are coming on the earth, for the powers of the heavens will be shaken. Then they will see the Son of Man coming in a cloud with power and great glory. Now when these things begin to happen, look up and lift up your heads, because your redemption draws near.”

Jesus Himself is saying again in Luke that He will not be coming back before the great tribulation to redeem His saints, and He tells them when you see these things begin to happen, look up because your redemption is near. If the saints were taken off the earth before the distress of nations why would Jesus tell His own disciples this? Wouldnt God in the flesh tell His disciples the truth! Of course He would! And He did! The whole world will see the Son of Man coming in a cloud with power and great glory!

“But in those days, after that tribulation, the sun will be darkened, and the moon will not give its light; the stars of heaven will fall, and the powers in the heavens will be shaken. Then they will see the Son of Man coming in the clouds with great power and glory. And then He will send His angels, and gather together His elect from the four winds, from the farthest part of earth to the farthest part of heaven."

Jesus says once again in Mark, AFTER that tribulation the signs of His Second Coming will be seen by the whole world, and He will send His angels to gather His elect from all over the earth. We have a choice to believe the very words of Jesus and prepare ourselves for the coming tribulation, or believe the false teaching of a pre-tribulation rapture.

“Behold, He is coming with clouds, and every eye will see Him, even they who pierced Him. And all the tribes of the earth will mourn because of Him. Even so, Amen.

“Now when He had spoken these things, while they watched, He was taken up, and a cloud received Him out of their sight. And while they looked steadfastly toward heaven as He went up, behold, two men stood by them in white apparel, who also said, “Men of Galilee, why do you stand gazing up into heaven? This same Jesus, who was taken up from you into heaven, will so come in like manner as you saw Him go into heaven.”

Even the angels of heaven told the apostles that Jesus would come back the same way they saw Him go up into heaven. There is nothing about a pre-trib rapture found anywhere in the scriptures.

Jesus said, “I am. And you will see the Son of Man sitting at the right hand of the Power, and coming with the clouds of heaven.”

“Now, brethren, concerning the coming of our Lord Jesus Christ and our gathering together to Him, we ask you, not to be soon shaken in mind or troubled, either by spirit or by word or by letter, as if from us, as though the day of Christ had come. Let no one deceive you by any means; for that Day will not come unless the falling away comes first, and the man of sin is revealed, the son of perdition, who opposes and exalts himself above all that is called God or that is worshiped, so that he sits as God in the temple of God, showing himself that he is God.”

These scriptures directly refute the false teaching of a pre-trib rapture. Paul clearly tells the saints LET NO ONE DECEIVE YOU! The day WILL NOT COME until the falling away COMES FIRST! AND the man of sin IS REVEALED, the Antichrist, the beast, the son of perdition, who will stand in the soon to be built third temple in Jerusalem and claim to be God.

We must prepare ourselves for the coming spiritual and physical battle that will face those who confess the name of Jesus Christ. If Christians don’t wake up now to this truth they will be unprepared for the evil that every person on this earth will face. Jesus said the distress and tribulation will be so great that men’s heart’s will fail them for fear and expectation of what is coming upon this earth. I urge every professing Christian to seek the face of the Lord today with all your heart, soul, mind and strength so that you may be ready for the day of evil.

There will be many Christians martyred during the reign of the beast (anti-christ, or son of perdition).

“When He opened the fifth seal, I saw under the altar the souls of those who had been slain for the word of God and for the testimony which they held. And they cried with a loud voice, saying, “How long, O Lord, holy and true, until You judge and avenge our blood on those who dwell on the earth?” Then a white robe was given to each of them; and it was said to them that they should rest a little while longer, until both the number of their fellow servants and their brethren, who would be killed as they were, was completed.”

“And I saw thrones, and they sat on them, and judgment was committed to them. Then I saw the souls of those who had been beheaded for their witness to Jesus and for the word of God, who had not worshiped the beast or his image, and had not received his mark on their foreheads or on their hands. And they lived and reigned with Christ for a thousand years.”

These scriptures prove that Christians will be on this earth during the tribulation period and they will be martyred for bearing witness to Jesus Christ and the word of God. These Christians will NOT worship the beast, his image, or take his mark on their foreheads or hands and they will be killed for their uncompromising faith in Jesus Christ. But they will have their reward in heaven and reign with Christ for a thousand years.

With Love In Christ,
Tyrone

Posted by Gospel Of The Kingdom Of God at 9:07 PM