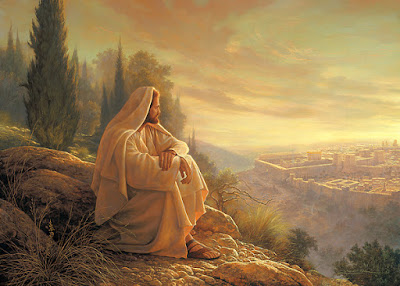 "Now as He drew near, He saw the city and wept over it,"

“O Jerusalem, Jerusalem, the one who kills the prophets and stones those who are sent to her! How often I wanted to gather your children together, as a hen gathers her chicks under her wings, but you were not willing! See! Your house is left to you desolate; for I say to you, you shall see Me no more till you say, ‘Blessed is He who comes in the name of the Lord!’

Why did Jesus lament and weep over Jerusalem?

Jesus wanted so much to take the children of Israel under His wings and love them, nurture them, help them, and bring them into the New Covenant, but they were not willing!

Their hard hearts, traditions, and pride kept them from humbling themselves to receive the gift that God was offering them!

The same was true in Jerusalem six hundred years before Christ!

"Thus says the Lord: “Stand in the ways and see, And ask for the old paths, where the good way is, And walk in it; Then you will find rest for your souls. But they said, ‘We will not walk in it.’ Also, I set watchmen over you, saying, ‘Listen to the sound of the trumpet!’ But they said, ‘We will not listen.’ Therefore hear, you nations, And know, O congregation, what is among them. Hear, O earth! Behold, I will certainly bring calamity on this people—The fruit of their thoughts, Because they have not heeded My words Nor My law, but rejected it."

The same is true today! Paul prophesied about these last days we live in!

"I charge you therefore before God and the Lord Jesus Christ, who will judge the living and the dead at His appearing and His kingdom: Preach the word! Be ready in season and out of season. Convince, rebuke, exhort, with all longsuffering and teaching. For the time will come when they will not endure sound doctrine, but according to their own desires, because they have itching ears, they will heap up for themselves teachers; and they will turn their ears away from the truth, and be turned aside to fables."

Posted by Gospel Of The Kingdom Of God at 8:57 PM