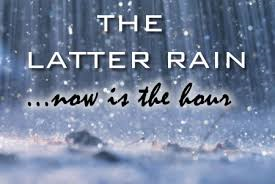 "Be glad then, you children of Zion, And rejoice in the Lord your God; For He has given you the former rain faithfully, And He will cause the rain to come down for you—The former rain, And the latter rain in the first month. The threshing floors shall be full of wheat, And the vats shall overflow with new wine and oil. “So I will restore to you the years that the swarming locust has eaten, The crawling locust, The consuming locust, And the chewing locust, My great army which I sent among you. You shall eat in plenty and be satisfied, And praise the name of the Lord your God,Who has dealt wondrously with you; And My people shall never be put to shame. Then you shall know that I am in the midst of Israel: I am the Lord your God And there is no other. My people shall never be put to shame."

So many people are crying out across the nation and the world for God to pour out His Spirit one more time before Jesus returns. And that's exactly what He's going to do, but is everyone ready for it?

God does things suddenly, and many times He does something when you least expect it. But we can clearly see that the only thing that's going to wake up His people today is a great outpouring and refreshing of His Spirit.

It's been over a hundred years since the last outpouring of God's Spirit at 216 North Bonnie Brae Street in Los Angeles California. An outpouring that can only be compared to the day of Pentecost when the Lord poured out His Spirit on the one hundred and twenty disciples in the upper room.

Although many thousands of souls have been baptized in God's Holy Spirit since then, including myself! It hasn't been as wide spread and world reaching as it was with those two outpourings.

So how do revivals start? What's the catalyst that makes a great outpouring possible? Well when we look at scripture we find a few disciples, both men and women, who were faithful to the Lord, who believed in Him, and waited on Him and His word to be fulfilled. Those who were willing to go against the status quo and the religious traditions of the day.

The same is true almost two thousand years later when students of Charles F. Parham met together at Bethel Bible College in Topeka Kansas. Those brave souls studied the word of God and read the book of Acts and repeated what the first disciples did before the Spirit was poured out on them, they prayed, worshipped, and waited on the Lord.


"The students had several days of prayer and worship, and held a New Year's Eve "watch-night" service at Bethel (December 31, 1900). The next evening (January 1, 1901) they also held a worship service, and it was that evening that Agnes Ozman felt impressed to ask to be prayed for to receive the fullness of the Holy Spirit. Immediately after being prayed for, she began to speak in what they referred to as "in tongues", speaking in what was believed to be a known language." (Wikipedia-Charles Fox Parham)

"As the Azusa Street Revival was coming to an end in the 1900s, it is recorded that Charles Parham, and William Seymour, on the same day, at two separate locations, prophesied that there will be another stronger move of God´s Spirit on the earth, which will take place 100 years from then. They said that it will be an outpouring of God´s Spirit and His Shekinah glory that would be greater and more far-reaching than what was experienced at Azusa."

Maria Woodsworth Etter prophesied “We are not yet up to the fullness of the former rain and when the latter rain comes, it will far exceed anything we have seen.” Also that “there will be a greater move of God in the next 100 years, the glory of which has never been seen…”

“By the mouth of two or three witnesses every word shall be established.”

"And He will cause the rain to come down for you—The former rain, And the latter rain in the first month."

Isn't January the first month? Well it is for us! Perhaps this January 1st 2018 will be the first month that God pours out His Spirit once again on the souls, praying, worshipping, crying out, and waiting upon Him! We can believe and we can hope!

Posted by Gospel Of The Kingdom Of God at 11:00 PM