He Was With Her! 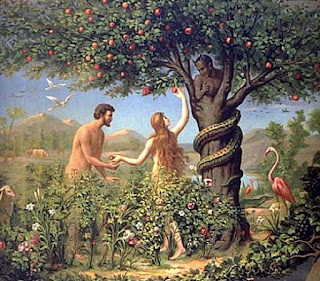 "So when the woman saw that the tree was good for food, that it was pleasant to the eyes, and a tree desirable to make one wise, she took of its fruit and ate. She also gave to her husband with her, and he ate. Then the eyes of both of them were opened, and they knew that they were naked; and they sewed fig leaves together and made themselves coverings."

The first deception and sin of man. This one act of disobedience led to the expulsion of Adam and Eve from the glorious garden of Eden, and caused every subsequent human born to be spiritually disconnected and separated from the One True God.

I thank God for this testimony in Genesis because it helps us to see how easy it is to fall from grace and be deceived by a fallen angel who hates us and God.

What I would like to point out though is that all the evil power that satan wields to deceive man, would have been negated with a simple, NO! And to make matters worse, Adam, who God made to take care of His creation was right there with his wife and didn't say or do anything to stop the deception!

We can see the same type of immaturity in some men today who let their wives rule over them and they don't fight or stand up for themselves or their family!

All Adam had to do was say, wait a minute Eve, I remember what God said:

"Then the Lord God took the man and put him in the garden of Eden to tend and keep it. And the Lord God commanded the man, saying, “Of every tree of the garden you may freely eat; but of the tree of the knowledge of good and evil you shall not eat, for in the day that you eat of it you shall surely die.”

That's why it's so important to have the word of God in our hearts and minds, it's the truth that keeps us from falling into deception and sin. If you obey the word of God and put into practice the teachings of Jesus Christ you will be able to resist the devil, and stand against his lies.

Of course God knew what would happen, but He allowed this situation to occur to test Adam and Eve, they had a choice to obey the command of God or take into their hearts and minds the lies of satan. They made the wrong choice!

Thankfully God also had a plan before the foundation of this world, JESUS! It's because of the Lord and Savior that we can be reconciled to God and be free from sin and death.

So let us make the right choice today, let us choose life instead of death!

Posted by Gospel Of The Kingdom Of God at 8:35 PM

Email ThisBlogThis!Share to TwitterShare to FacebookShare to Pinterest
Labels: Adam and Eve, Command Of God, Deception, Garden Of Eden, He Was With Her, Satan