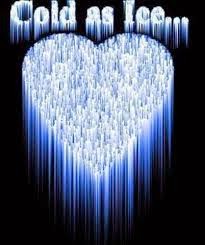 “Then they will deliver you up to tribulation and kill you, and you will be hated by all nations for My name’s sake. And then many will be offended, will betray one another, and will hate one another. Then many false prophets will rise up and deceive many. And because lawlessness will abound, the love of many will grow cold."

Isn't lawlessness abounding today? I sure think so, just look at the British soldier who served a tour of duty in Afghanistan, fighting the Taliban, only to come home and get run over by a car and hacked to death in broad daylight by two radical Islamist's, surely lawlessness is abounding!

I don't even watch the news anymore because most of it is reporting the latest murder, kidnapping, and violence that goes on daily, surely lawlessness is abounding.

I can definitely see that the love of many people have grown cold as many are so oppressed by Satan and bound by sin that they are beyond feelings!

Jesus Himself encountered the same cold hearts when He came to this earth and we are seeing the same thing today. Here's a question: would you recognize and receive Jesus if He came to your city, your 'church building', or even your home?

The religious leaders of the day did not recognize or receive the Messiah they were waiting for and who Moses prophesied about in the scriptures they read every Sabbath because their hearts were hard and their eyes were blind, do you think it's any different today?

"And He entered the synagogue again, and a man was there who had a withered hand. So they watched Him closely, whether He would heal him on the Sabbath, so that they might accuse Him. And He said to the man who had the withered hand, “Step forward.” Then He said to them, “Is it lawful on the Sabbath to do good or to do evil, to save life or to kill?” But they kept silent. And when He had looked around at them with anger, being grieved by the hardness of their hearts, He said to the man, “Stretch out your hand.” And he stretched it out, and his hand was restored as whole as the other. Then the Pharisees went out and immediately plotted with the Herodians against Him, how they might destroy Him."

Even after three and a half years of receiving the anointed words and love of Jesus, the disciples hearts were still hard after His death, burial, and resurrection! If that was true for them, how much easier is it for us who have not seen or walked with Jesus physically, to have hardness of heart in many areas?

"Later He appeared to the eleven as they sat at the table; and He rebuked their unbelief and hardness of heart, because they did not believe those who had seen Him after He had risen."

So let us remember the sobering words of the Lord through the prophet Jeremiah.

“The heart is deceitful above all things, And desperately wicked; Who can know it? I, the Lord, search the heart, I test the mind, Even to give every man according to his ways, According to the fruit of his doings."

Posted by Gospel Of The Kingdom Of God at 6:17 PM