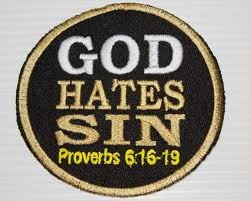 "Now from the sixth hour until the ninth hour there was darkness over all the land. And about the ninth hour Jesus cried out with a loud voice, saying, “Eli, Eli, lama sabachthani?” that is, “My God, My God, why have You forsaken Me?”

Why did God forsake His Son in the darkest moment of His earthly life? While He suffered an agonizing, shameful, and painful death on the cross?

The simple answer is, God hates sin! And the sins of the whole world were placed upon the body of Christ, who offered Himself as a sacrificial lamb to take away the sins of the world. Sin separates us from God and during the time of darkness while Jesus was on the cross suffering for our sins, God Almighty turned His face away from His Son.

"For to this you were called, because Christ also suffered for us, leaving us an example, that you should follow His steps: “Who committed no sin, Nor was deceit found in His mouth”;  who, when He was reviled, did not revile in return; when He suffered, He did not threaten, but committed Himself to Him who judges righteously; who Himself bore our sins in His own body on the tree, that we, having died to sins, might live for righteousness—by whose stripes you were healed.  For you were like sheep going astray, but have now returned to the Shepherd and Overseer of your souls."

Jesus paid the ultimate price so that we could be reconciled back to God, He even experienced the pain of death as His soul went down to Hades, separated from the presence of God.

“Men of Israel, hear these words: Jesus of Nazareth, a Man attested by God to you by miracles, wonders, and signs which God did through Him in your midst, as you yourselves also know— Him, being delivered by the determined purpose and foreknowledge of God, you have taken by lawless hands, have crucified, and put to death; whom God raised up, having loosed the pains of death, because it was not possible that He should be held by it.

Understand that it takes only one sin, one act of disobedience to displease a Holy and Righteous God, just look at  Adam and Eve.

To the woman He said: “I will greatly multiply your sorrow and your conception; In pain you shall bring forth children; Your desire shall be for your husband, And he shall rule over you.” Then to Adam He said, “Because you have heeded the voice of your wife, and have eaten from the tree of which I commanded you, saying, ‘You shall not eat of it’: “Cursed is the ground for your sake; In toil you shall eat of it All the days of your life. Both thorns and thistles it shall bring forth for you, And you shall eat the herb of the field. In the sweat of your face you shall eat bread Till you return to the ground, For out of it you were taken; For dust you are, And to dust you shall return.”

So the next time you want to gratify the lusts of your flesh and sin against your body and God, remember how much Jesus suffered for your sins, remember the price He paid to give you life when you deserve death, and remember how much sin separates you from God.

"Behold, the Lord’s hand is not shortened, That it cannot save; Nor His ear heavy, That it cannot hear. But your iniquities have separated you from your God; And your sins have hidden His face from you, So that He will not hear."

Posted by Gospel Of The Kingdom Of God at 11:15 PM

Email ThisBlogThis!Share to TwitterShare to FacebookShare to Pinterest
Labels: God Hates Sin, Jesus Forsaken On The Cross, Sin Separates, The Penalty For Sin Is Death