Tornado In The Storm 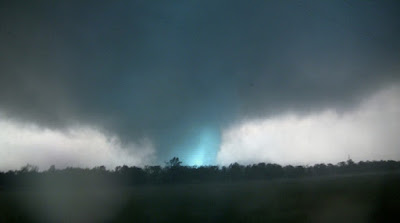 My prayer: Lord, I give all the glory to You for all the gifts you have been giving to me and I want to do your will with everything you are  entrusting me,  sharing or offering my prayers towards all the events and things you reveal and hopefully all who read and believe them be advised by your love and faithfulness in the name of Jesus. Amem!

Yesterday, me, my husband and our daughter went to a wedding of an ex-co-worker of mine in Libertyville, IL and my husband knew through the forecast that it would happen a thunderstorm, so before we left he prayed and asked the Lord to protect us all and also for the Lord to hold the storm until we were safe home and also all those who were going to the wedding.

Well....we decided to leave earlier from the time that the wedding would really end and when we put the baby in the car and put everything in the car it started to rain. We could also see that the clouds and the sky were very different from a normal rain. We kept praying and asking the Lord to protect us all the way home because there were a lot of lightinings too.

For the glory of God we could arrive home safe. I did everything I needed to do before going to bed, my husband went to bed before me to wake up early to go to work. When I went to bed, he was already half sleep. It was very strange that after a very tiring day I was not sleepy!

I tried to sleep but I could not. I said: "I cannot sleep" And I also started praying that if anything would happen for the Lord to reveal it to me in a dream or something. I was starting to feel the same heavy thing from sometime ago that something was about to happen and lives were envolved.

So, after probably one hour or two I was able to sleep and I had a terrible dream. In this dream the sky was full of dark clouds as if it would happen a very terrible storm. The clouds started getting dark blue and very suddenly they became dark gray and in a question of seconds a tornado formed in the clouds and started coming down to the ground and I could see that this tornado was formed in the sky, I could see the dark kind of black hole in the sky that this tornado formed and in the dream I knew this was something very terrible that would happen wherever this tornado passed through. Then it finished the dream.

I told my husband in the morning that I dreamed of a terrible storm and I was half sleep and he said I could tell him when he called me from his work in his break. But I decided to share this dream because it was extremely quick how the Lord made this dream come true, for I turned on the TV today in the morning and I saw the devastating storm+tornado that happened in Joplin, Missouri where there was a huge devastation and already 89 people were killed.

May the Lord have mercy upon the people in Missouri and all over the world and may all of us fall on our knees and give our hearts and obedience to the Lord while there is still time!

In awe of God's faithfulness,

UPDATE: Please watch this video to see how much destruction tornadoes are doing in many places around the USA.

May the Lord have mercy on each one of us,

Cynthia
Posted by Gospel Of The Kingdom Of God at 9:01 AM